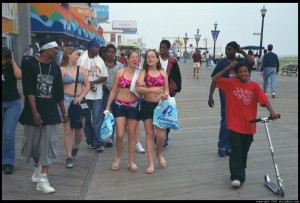 First it loses the Miss America Pageant, and now Atlantic City may lose its nostalgic presence on the Monopoly board. That’s 250 million units sold since 1950. Where’s Donald Trump when you need him?

In a scheme vaguely reminiscent of New Coke, the marketing minds at Hasbro are considering replacing Park Place, Baltic, Ventnor, Atlantic, Boardwalk and the other iconic squares with a “here and now” version voted on by…you and me! Holy blue M&M! Here comes Cleveland and Seattle.

The new version would let consumers vote to fill the 22 spots on the board. Atlantic City’s blighted real estate apparently is not among the choices.

“Sure, put in the Statue of Liberty and Disney World and other places,” said Jeffrey Vassar, executive director of the Convention and Visitors Bureau, which has a “Help Keep Atlantic City on the Board” petition on the city’s Web site. “But it’s a slight to not have the Atlantic City Boardwalk as one of the stops,” he added.

Will Atlantic City be able to propel the public to protect Park Place? Will The Donald get fired…up? Will the nostalgia police prevail in Pawtucket? Don’t bet on it.