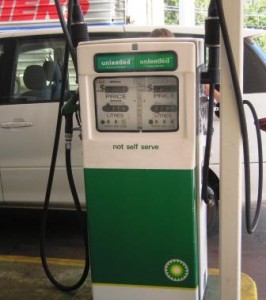 From browsers to bowsers… It’s summer in Sydney, and today’s Daily Telegraph takes on the oil industry in a front page piece (and editorial) decrying the high price of gas at the pump…or the “bowser” as its called here. Now this sure sounds all too familiar. The oil companies are under fire and claim they have little control over consumer prices:

“The petrol companies stood by their pricing practices, daring the ACCC to prove any uncompetitive tactics in the industry. BP spokesman Chandran Vigneswaran said: ‘We are more than happy to co-operate with the ACCC . . . we have been open and transparent in the way we price petrol.'”

But then the Daily Telegraph itself, apparently no friend to big oil, piped in with its own survey:

In an online poll, almost 2000 Daily Telegraph readers â€“ 96 per cent of respondents â€“ said motorists were being taken advantage of by the petrol companies.

With wholesale oil prices markedly off their highs, Australian consumers and its public defender, the Australian Competition and Consumer Commission, will keep this fight in the news. The call: to publicly shame the oil companies. Why don’t they just hold a mid-term election to scare the politicians into taking action?