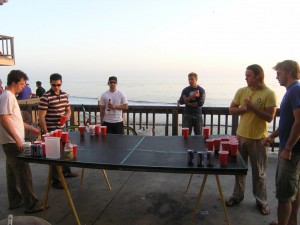 Anyone who has a son or daughter in college should have heard of the game “Beer Pong” or, as it’s sometimes called, “Beirut.” (Don’t ask.) It was therefore not surprising that Sunday’s New York Times page one story on the game, whose goal is to drive one’s opponent to drink, was the paper’s most e-mailed story of the day.

The story revolved around how marketers were hopping on their Clydesdales to capitalize on this brewing phenomenon. The nation’s #1 beer meister Anheuser-Busch even re-dubbed the game “Bud Pong” until, of course, August Busch IV came to his PR senses. The ensuing letters-to-the-editor summed up why.

With all the scrutiny the alcoholic beverage industry has endured over the issue of under-aged drinking, which clever marketer thought this endorsement was a good idea, especially given all the millions the industry has spent to forestall any regulatory action against it? Yesterday, to its credit, Anheuser-Busch pulled the stopper.