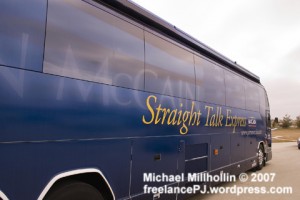 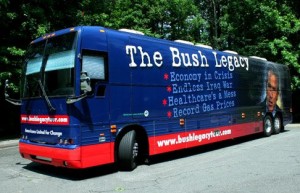 There’s something about buses that draw designated message-drivers from a wide swath of the PR spectrum. My first mobile PR experience entailed publicizing a large bus-like motor home outfitted with floor-to-ceiling, trompe l’oeil-style photographs on its walls. It showed the interiors of a typical Courtyard by Marriott hotel room.

Marriott Corp. marked its first brand extension by touring the mobile menagerie to office parks around the country in an effort to bring the faux room to lunching office workers. O.J. and the B-M special events team may even have added a couch and a bed to complete the physical experience.

Years later, Radio City mounted the Rockettes rolling tour of New York metro-area shopping malls in an effort to kick-up interest in the summer version of the Christmas Spectacular. A couple of Rockettes, dressed in their civvies, rode on the bus. We were charged with generating local press at each stop. Ahhh, what a glam profession PR can be! (I’ll skip the crisis work we did for Greyhound after one of its drivers went berserk.)

Today, we’re saddled with the “Straight Talk Express,” Senator McCain’s mobile billboard that snidely seeks to preserve the persona that propelled his presidential prospects. Bused messages are a most bi-partisan affair as evidenced by the kick-off today of the “Bush Legacy Tour,” which features a carefully curated mobile exhibit of the failings of this administration. 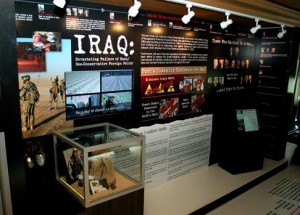 The Bush Legacy Tour offers a tried-and-true communications vehicle to remind memory-challenged Americans of the seven-year criminal assault this administration has made on their way of life. Straight talk is one thing, fact-based evidence on display, quite another. Oh, and let’s not forget “Off the Bus,” the Jay Rosen-Arianna Huffington citizen-journalist fueled effort to report on this year’s election. 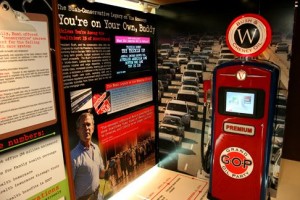