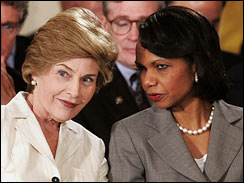 As I pen this, President Bush (yes, he’s still President) will take the podium at a surprise news conference in which he’ll presumably field questions (not shoes) hurled from journalists. He’ll certainly have a rich choice of timely news topics on which to opine given the unmitigated mess with which he’s leaving our next President.

But what is the real purpose of this sudden desire talk to the American people – his first presser since that fateful Baghdadian brouhaha on December 14? Surely, any new policy initiatives will have little weight eight days before the Bushies bid us all adieu. Sadly, I suspect that this high profile appearance is just another cog in this administration’s recent full court press (“legacy tour“) to re-shape how it will be remembered.

So the question I have is whether eight years of malfeasance can be swept under the carpet with a slurry of mainstream media interviews? Has today’s media environment, which produces a relentless stream of news from countless sources (and shortened public attention spans), enable this administration to alter Mr. Bush’s presumed legacy of the worst President in American history?

In an opinion piece titled “Eight Years of Madoffs,” New York Times columnist Frank Rich recounts the myriad transgressions and scandals this administration foisted on the American people during its reign. One example he cites is the recent government study on the “nation-building” fiasco in Iraq, which cost American taxpayers tens of billions of dollars in fraudulent waste.

It wasn’t the amount or the ineptitude of the crime on which Rich focused, but rather the scant attention it earned in the national news media:

“Whatâ€™s most remarkable about the Times article, however, is how little stir it caused. When, in 1971, The Times got its hands on the Pentagon Papers, the internal federal history of the Vietnam disaster, the revelations caused a national uproar. But after eight years of battering by Bush, the nation has been rendered half-catatonic. The Iraq Pentagon Papers sank with barely a trace.”

So I wonder whether Mr. Bush’s recent PR strategy to align and deploy in the MSM his most trusted aides — Condi, Cheney, Laura and Dana — can achieve the same goals they might when he first took office given the vastly changed media landscape?

To its credit, one MSM outlet, the Washington Post, today announced its own “The Bush-Cheney Legacy Project” in an effort to more accurately capture and preserve the last eight years. Let’s hope it gains a digital foothold.