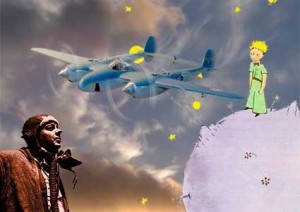 In what may be a case study on the perils companies face in an age of media-empowered consumers, today we learn how business-as usual for Boeing led to a most combustible consumer-created crisis.

Small in comparison to what BP faces, the impact on the company’s reputation still stings. It could have been much worse had Boeing not been listening.

Stephanie Clifford’s post late yesterday titled “Boeingâ€™s Social-Media Lesson” on The New York Times‘s Media Decoder blog outlined how a seemingly inconsequential company response can produce unintended unpleasantness. The incident revolved around an eight-year-old boy’s crayon-drawing of a plane he sent in to Boeing with the hope they’d build it.

The company’s legal department no doubt had a hand in crafting its response:

â€œLike many large companies,â€ it wrote Harry in a form letter, â€œwe do not accept unsolicited ideas. Experience showed that most ideas had already been considered by our engineers and that there can be unintended consequences to simply accepting these ideas. The time, cost and risk involved in processing them, therefore, were not justified by the benefits gained.â€

The boy’s Dad, an ad executive who writes a blog and often uses crowd-sourcing to elicit creative ideas, shared the incident with his readers and tweeted about it. Fortunately, to its credit, Boeing recently factored Twitter in to the company’s communications mix. Todd Blecher was the company’s real-time point man:

“Though Boeing had traditionally been buttoned up and corporate, Mr. Blecher began using Twitter to respond to supporters of Harry. ‘Weâ€™re expert at airplanes but novices in social media. Weâ€™re learning as we go,’ he wrote in one message.”

It was just a few years ago when a crowd could take command of one’s brand and run away with it, for better or worse. And while brands continue to struggle with how best to harness the reputational reverb capacity of socially driven sites like Twitter and Facebook, Boeing’s new listening and engagement strategy immediately proved its value as a first line action for mitigating a potential crisis.

As the boy’s father noted:

â€œIt was just so cool to see a company become kind of human.â€