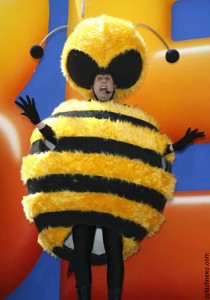 A quick Google search on the term “buzz marketing” yielded 1.1 million results. I bet few actually have the ingredients to the elusive elixir for generating actual buzz for one’s product or service.

Opening a copy of today’s New York Post, there it was: the formula for generating buzz. It came in the form of A-list funnyman Jerry Seinfeld who’s been on hiatus for the better part of a decade, albeit for his taped turns on Fox each night.

To promote his Dreamworks’ animated fall feature “Bee Movie,” Mr. Seinfeld dressed as a bumble bee and took to the skies for a photo-op at the world’s most famous film fest. (Who said cajoling celebs to promote their work is hard?)

“Anything I hate,” Seinfeld said through his body mike, ‘it’s publicity that smacks of any kind of desperation.”

Elsewhere in The Post, I come across another even more curious item in which some PR consigliere — Rubenstein, perhaps — likely played a role in the roll-out of some embarrassing (to the paper) tidbits of news. The story reported a number of ethical improprieties alleged by a fired “Page Six” alum, including some nocturnal naughtiness by the newspaper’s top editor.

The Post chose (or was advised) to publish the allegations on a Friday atop the gossip column-of-record — not to generate buzz for a salacious story — but rather as a pre-emptive measure to thwart any incremental coverage by some less benevolent chronicler of the Murdochian daily. Familiar PR strategy. (Apparently Gawker agrees.)

Update: The New York Times took the lead and ran with the story smack dab on its front page. (No not the Seinfeld piece.) So much for trying to cut off the story’s legs.