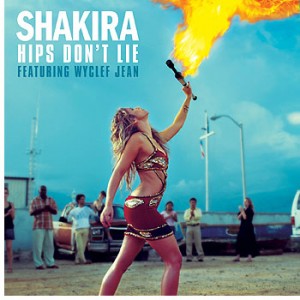 BL points to a Pepsi promotion wherein consumers are invited to go online to design a can of Pepsi. Cool idea, and certainly part of a larger trend.

BL notes, however, that Jones Soda has been letting people do this since 2000. Since I never heard of Jones Soda, I’ll let it fizzle.

This Sunday’s Los Angeles Times has a related story on how the music industry has embraced and profited from consumer engagement, and specifically, catalyzing consumers to create original marketing content. The industry’s most famous example to date, of course, had Epic Records promoting pop singer Shakira’s hips.

“The contest yielded some 500 submissions of fans lip-syncing and booty-shaking in extremis…the pair of ‘Hips’ were eventually streamed more than 50 million times, making ‘Hips Don’t Lie’ easily the Nielsen BDS most-streamed video of the year…Shakira’s song went on to become a No. 1 hit in 20 countries, selling 1.7 million copies.”

Much of this movement is covered in Ben McConnell’s latest tome Citizen Marketers, which explores the phenomenon of when consumers embrace (or disembrace) a brand by unilaterally and without compensation creating content for it that happens to catch fire.

In the LA Times piece, and with the Pepsi example, we’re talking about companies that attempt to let the consumer interact, but still reserve some semblance of brand stewardship. As we’ve seen all too frequently, however, this sometimes can backfire. Think last year’s promotional gambit by the marketing team for Chevy Tahoe.

Tom Hayes, who writes the popular Silicon Valley new-media marketing blog http://www.tombomb.com/, says of the explosion of consumer engagement in the music industry that the benefits outweigh the risks.

“There are so few downsides for a smart band aside from locking yourself into something that makes you look silly,” he said. “The act of just engaging with fans and making the offer has a powerful effect on a community.”

The editor of Blender magazine is feels it’s too soon to say that fan-based contributions will replace professional efforts to shape popular culture.

“It seems like a totally grass-roots approach, but it’s not necessarily effective,” Marks said. “What happens to the multitude of [fan contest efforts]? And where does it get played? There’s still no way to measure the effectiveness of this stuff and monetize it.”