Well-intentioned, but awkward is how I would describe two current efforts to engage with customers when it’s not so clear those customers wish to be engaged with. I recently wrote about a McDonalds marketing promotion called “Pay With Lovin” wherein cashiers randomly selected customers to act out an act of kindness in exchange for free food.

Now maybe I’m just a jaded New Yorker, but there’s no way I would want to make a public spectacle of myself for a bag of fries, in spite of Mickie D’s good-hearted intentions. 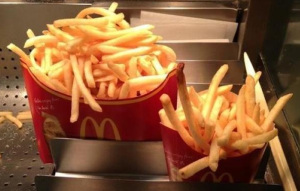 I’m apparently not the only QSR customer who feels this way. A Wall Street Journal reporter unwittingly stumbled into a McDonalds in DC’s Union Station and had less than a positive reaction to the sudden spotlight the workers shined on her. Kate Bachelder wrote in her piece “I’m Not Lovin It, McDonalds:”

“The public embarrassment ended soon enough, and I slunk away with my free breakfast, thinking: Now there’s an idea that never should have left the conference room.”

As if her piece wasn’t fair warning, our friends at Starbucks just ran full-page newspaper ads to kick off an initiative called “Race Together” wherein its baristas will also engage store customers, albeit in a less promotional (I think) and more beneficial-to-society kind of way. This time, workers are being “encouraged” to start a dialog on…race, of all things.

I’m not so sure Starbucks’ baristas are experts on the subject of race relations in America. I do agree that it’s topical and there is a national need for such a dialog.

I just wonder whether the conversation should take place while waiting for one’s morning jolt of joe half awake in an interminable line with the blare of music and hissing steam in the background.

Apparently the initiative comes from a CEO for whom I have considerable respect, Howard Schultz. Fortune writes:

“But the executive, who oversees a coffee empire with 4,700 U.S. stores, has now taken on arguably the most polarizing political debate in the United States: race relations.” 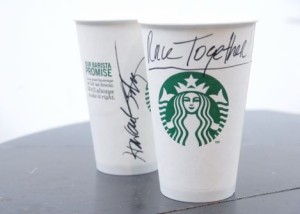 Don’t get me wrong. The fact that Mr. Schultz is encouraging his workers to bring up the subject in and of itself will get people talking about it. In its piece “Why your Starbucks barista wants to talk about race relations,” the Christian Science Monitor reported on how it might unfold:

“When did you first become aware of your race?” is one question a barista might ask a patron who is interested in starting one of these free-range “organic dialogues,” according to Starbucks’ spokesperson Linda Mills, in a phone interview. “

It’s the venue and those being asked to initiate this delicate conversation that leaves me scratching my head. Like the McDonalds promotion, there’s is a faulty assumption that Starbucks’ customers even wish to engage in a conversation about race with their local baristas.

“OK. That’s one grandé de-caf mocha cappuccino, and what did you think of what happened in Ferguson last night? Your name please?”

Who knows? Maybe Mr. Schultz is a genius who recognizes that the conversation has to start somewhere. Why not in his stores? He’s always been more about doing well by doing good and for that, he can’t be faulted.

Faced with an online backlash, Mr. Schultz joined with my old pal Larry Kramer of USA Today to pen a post on Medium on the rationale for using Starbucks as a venue to start this dialogue:

“Coffee shops have always had a role to play as a venue for open conversation about issues that matter. We hope you’ll join us, at your community Starbucks, with your friends and neighbors.”