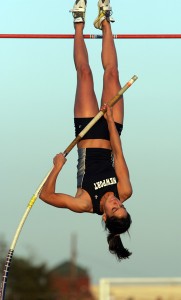 In an age when the lure of celebrity is like a drug — and for some, literally — it was refreshing to read about one talented young athlete who declared enough is enough. Allison Stokke, a record-holding pole vaulter from Newport Beach, Calif., became famous through no fault of her own. She now wants out of the spotlight.

Apparently, someone posted a photo of the attractive track star, which in turn spread virally online and off prompting thousands of e-mail messages to her My Space page, etc.

“‘I just want to find some way to get this all under control,’ Stokke told her coach. Three weeks later, Stokke has decided that control is essentially beyond her grasp. Instead, she said, she has learned a distressing lesson in the unruly momentum of the Internet.”

Contrast this grounded pole vaulter with the whorish behavior of one Phoebe Price. Who? Ms. Price gives Paris a run for her money in the famous-for-being-famous category of faux celebrity. While Ms. Stokke is looking to free herself from the yoke of fame, the talentless Ms. Price can’t get enough.

Finally, we have word of one person whose 15 minutes in the spotlight lasted way too long. In a move that many will applaud, anti-war activist Cindy Sheehan has decided to hang it up and head back to California. I can’t say I’ll miss her, in spite of my initial support for her photo op in Crawford.