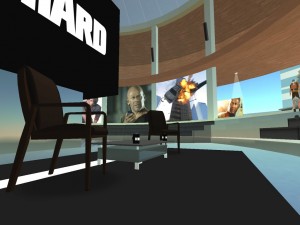 I guess the context of a Second Life event can still drive media interest. Neville Hobson reports on the virtual world appearance of Bruce Willis as avatar to hype his new/old starrer “Die Hard 4.0 (overseas) and “Live Free or Die” (here). Some 60 attended the presser, which:

“…featured a moderator who fielded text questions from the assembled journalists, bloggers and contest winners…”

But the question lingers in my mind: will the Second Life-driven publicity gimmick actually put fannies in seats when the film bows June 27? I mean all those avatars seemed to be less interested in the action film, and more smitten with the celluloid venue and its late-arriving hero. Even Mr. Willis got the bug:

(Hey Neville, were those your local times?) Judging from Mr. Hobson’s obligatory twittering, the banter was pretty banal, thought the digital graphics were way cool. The purveyors of this online affair, which included a podcast and YouTube presence, will deem it a success — not based on the qualitative aspects of the exchange, but more for its deviation from the staid press junket as a means to break through the clutter. Here’s Neville’s take:

“I have seen few media reports or blog posts so far about Fridayâ€™s event, which surprises me a bit. But in any event, I think it was a great way to connect Bruce Willis and the new Die Hard movie with fans as well as mainstream media and interested social media types.”

Couldn’t a webcast with real-time Q&A achieved the same kind of result, (e.g. digital footprint), for the film? Nah. That’s so outrÃ©!