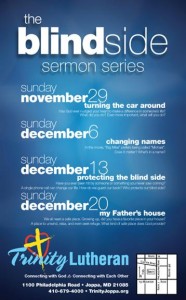 The Daily Beast today reports on the remarkable box office success of the Sandra Bullock-starrer “The Blind Side.” The film to date has grossed more that $200 million on a paltry budget (by Hollywood’s standards) of $29 million. It usurped “Twilight: New Moon” in its third week atop the weekly rankings.

Could it be that Ms. Bullock’s star has finally taken hold big time? (I’m told she’s fab in the flick.) Does “The Blind Side” mark the resurrection of sports on the big screen after the disappointing George Clooney-starrer “Leatherheads?” The answers are likely neither, though the film’s â€œfour quadrantâ€ appeal to male, female, young and old, certainly helps.

Apparently, the movie’s marketers had the divine provenance to retain a PR firm that specializes in corralling the Christian coalition.

“Grace Hill Media, a marketing and PR firm that specializes in faith-based audiences, was aggressively selling The Blind Side to pastors and ministers around the country.”

Now this is not the first time, nor will it be the last, that a studio tapped the faithful to drive box office receipts. In October 2005, I wrote about a similar scheme to support the “Chronicles of Narnia,” and before that, another sports film – for golf. And then, who can forget the special screenings organized for Mel Gibson’s (misguided but most profitable) “Passion,” including one for the Pope? (Talk about engaging a key influencer!) 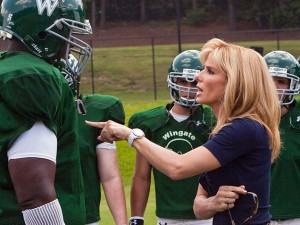 As for “The Blind Side,” the tactics were familiar:

“One of Grace Hillâ€™s most innovative techniques was to provide half a dozen clips from The Blind Side, along with â€œsermon outlines,â€ to 22,000 megachurches (most of which are equipped with huge screens, typically used to display lyrics to rock hymns). Pastors were encouraged to, while showing a movie clip to their congregation, apply a â€œbiblical connectionâ€ and â€œlife applicationâ€ contained in the Grace Hill promotional materials.”

The stategy to court constituents (and potential evangelists, literally) to create advance movie buzz is nothing new. I remember years ago working on the film “Absence of Malice” in which an everyday businessman (Paul Newman) was libeled by newspaper reporter (Sally Field). The studio retained PR legend John Scanlan to engage journalism and legal groups to explore what constitutes journalistic “malice” and in so doing, create buzz for the film. Our firm handled mainstream entertainment media outreach (as if there were any other).

And today, with the advent of niche social networks, the process of identifying or even building fresh channels of like-minded constituents becomes that much easier.