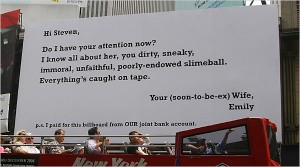 (Sure sounds like a Michael Douglas or Richard Gere movie.) Some months ago, Weber-Shandwick’s Robert Ricci spoke out against deceptive viral and word-of-mouth marketing tactics. This blog also has weighed in on the subject from time to time.

In fact, I recently joined PR bloggers Paull Young/Trevor Cook’s effort to end the nefarious industry practice known as astroturfing. Others lent their names to the movement, including Cluetrain Manifesto co-author David Weinberger.

Last week, we learned of a hugely successful viral marketing campaign to promote a Court TV program. The promotion combined outdoor advertising and a weblog written by someone named “Emily.”

“The billboard created interest… A booking agent from ‘Good Morning America’ sent an e-mail to Emily inviting her on the show. British Glamour wanted to make her the subject of a feature article…”

After some digging, it was learned that there is no Emily and the entire effort was fabricated to attain the elusive Holy Grail of marketing — viral buzz. For some, or rather, many in our line of work, the Court TV ploy will be viewed as a grand success.

“The good news is that even after the ruse was discovered, people visited the Emily blog, pushing it to one million hits by the end of Thursday…Court TVâ€™s marketing group liked the idea so much that they made it a large part of the campaign.”

For others (like me), it’s just one big, admittedly clever, consumer deception.