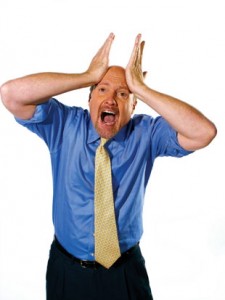 While not as high brow as the Always On Summit held at Stanford University this week, the Publicity Club of New York*’s con-fab in the city yesterday drew some 180+ PR pros. The audience came from all walks of the industry — big and small agencies, financial services firms, media and publishing companies, healthcare providers, universities, entertainment providers, etc. The subject of this distinctly PR 1.0 event: Business TV News.

On the panel sat a handful of the top business news and guest segment decisionmakers for CNBC, CNN “American Morning,” Bloomberg TV & Radio, and ABC-TV News. Some of what we heard:

— ABC’s Charlie Herman tell us that 24-hour all news program ABC World News Now has two slots for business news guests (at 9:30am and 4:30pm).

— Bloomberg’s Karen Toulon said that Bloomberg TV takes lots of (“hopefully”) live guests. One day she said the network carried some 200 live interviews over its 24-hour programming window. She also relayed how fab the company’s new worldwide headquarters is, and that they still serve snacks in the waiting area.

— CNN “American Morning’s” Paul Amin said that he looks for lighter business features in the second half of the four-hour program, and is especially interested in some of the unusual viral marketing campaigns being mounted by established marketers.

— Finally, Nick Dunn, who came in from CNBC’s HQ in leafy Englewood Cliffs, reiterated the business network’s policy of being first in terms of guest appearances. (It was he who cancelled at the last moment an appearance by the U.S. Secretary of Treasury after the Secretary’s PR reps misled him and had their charge on Fox News Channel before CNBC.)

Nick also let on that this fall CNBC will no longer reside under the MSNBC.com domain. CNBC.com will be born (again?) and stand alone with its own branded web site complete with streaming video and other digital accoutrements to which we’ve grown accustomed from the digital minds at NBCUni.

For those who attended, thanks for coming. We hope to post the opening remarks on the PCNY website before too long, and you may even see the full event on mediabistro.com.