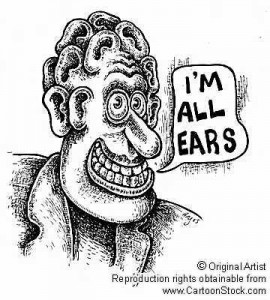 I just came back from the Lincoln dealer, which had finally fixed the dent in my roof caused by a failed roof rack. (When I arrived to collect my car, the owner smiled at me and said “squeaky wheel.”)

You may remember my post on the Monday after the July 4th weekend wherein I ranted on just how “dumb” Ford customer service was by refusing to pay for the problem not of this Lincoln loyalist’s making.

The post prompted some interesting comments, including one from a senior communications executive at Dell, which, as a company, learned a thing or two about customer service these last couple of years. More importantly, at least for me, it caught Ford’s eye:

Peter – I just wanted to let you know that Ford is listening and we are currently looking into your issue.

The youthful Brian Stelter reports in Friday’s New York Times that one of the more reviled consumer-facing companies is now actively listening to “the conversation” — and engaging where necessary. As Comcast’s Digital Care Manager, Frank Eliason serves as the company’s early warning system, also charged with neutralizing (or at least softening) brewing brouhahas. One customer, who angrily blogged about an excessive cable bill, had this to say:

â€œItâ€™s one thing to spit vitriol about a company when they canâ€™t hear you,â€ she said in an interview. Itâ€™s another, she said, when the company replies. â€œI immediately backed down and softened my tone when I knew I was talking to a real person.â€

Of course, this is the company that inadvertently created one of the most popular PR case studies on the power of citizen journalism: the infamous Comcast Repairman (who fell asleep on a customer’s couch). And shortly thereafter, Ad Age‘s Bob Garfield started a nifty, but nasty site called Comcastmustdie to rally the groundswell against the nation’s largest cable provider.

On the one hand, we should be encouraged that Comcast finally woke up and smelled the coffee. On the other, how much reputational damage was done before it did?

As for me, there’s a silver lining to my online rant about Ford customer service: my wife finally sees some purpose to my posts. (It saved us $250.)

Oh, btw, if you’re not good listeners, here are several firms that will do it for you: