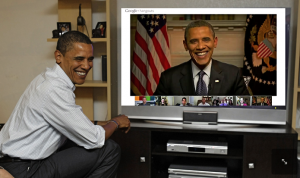 One of the points I had hoped to emphasize in my last post was that Twitter, blogging, Facebook and Google+ offer an even more controlled communications environment than what a fastidiously prepped/messaged executive might face in a media interview.

David Carr may give Rupert Murdoch props for his more authentic Twitter persona, but it’s Mr. Murdoch who’s thumbing his nose at Mr. Carr and his colleagues in the Fourth Estate whose journalistic scrutiny Twitter has allowed him to sidestep.

This week, we’re witness to another example of this “command(er) and control” approach to making one’s POV heard in a less fettered manner. Our President participated in a Google+ Hangout.  In her piece titled “Obama finds virtual end-around to bypass the White House press,” Amy Parnes wrote in  The Hill:

“The virtual interview is part of a larger effort by the White House to connect directly to Americans without going through the news media.”

“I know weâ€™re not picking the questions,” then quipped: “Would that we could.”

Journalists were not too pleased:

“I worry sometimes that the administration subverts the Wild West appeal of new media by rather scrupulously scrubbing and screening questions â€” like they have done in various new media town-hall settings,” said Julie Mason, a talk show host on Sirius-XM.

Truth be told, communications pros have more options available to them than ever before. I, for one, am not discounting the value of “earned” media, especially when one considers the still-dominant digital and social footprints generated by stories originating in stalwart news orgs such as The New York Times, Bloomberg or Reuters. Didn’t HP’s study of some widely shared stories on Twitter validate this?

On the flip side of the coin, when was the last time Google subjected itself to a media interview? When it wants to make news, it simply posts what it wishes to say on one of the company’s blogs. Those that stalk Google soon are tweeting away until the world knows what Google wanted it to know.

This “owned media” strategy for delivering unfiltered prose is especially effective when it emanates from a company in the media spotlight or a recognized newsmaker or newsmaking enterprise. As Tom Foremski astutely noted, all companies are media companies today. Now we just have to figure out how best to call out those who use their new-found platforms-to-persuade for nefarious ends.

Then again, most don’t. I’m looking forward to CNBC’s Darren Rovell’s Google+ Hangout on Monday following the Giants victory over the Pats this weekend!