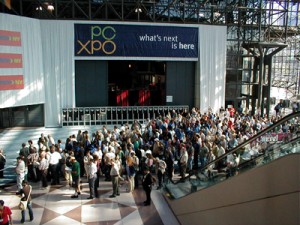 Who missed David Pogue and Steven Levy’s gushing coverage of the TED Conference in Monterey the week before last? Talk about a hot ticket!

Then there was January’s Always On Confab in New York, and its sibling AO Hollywood skedded for the first week of May. I just attended the first Community 2.0 Conference in Vegas, which fell on the heals of the New Communications Forum, also held in Elvis land.

Not to be counted out, Rafat, Staci and the gang at the digital cognoscenti-revered Paid Content, have jumped on the pundit wagon with their first conference on the economics of social media next month in Beverly Hills.

Who can keep track of the digital conference revolution? I don’t remember the dot-com era spawning so many talk-a-thons!

But today we’re again experiencing a tech/social media-driven conference renaissance (despite Valley Wag’s diss of Red Herring’s pay-for-play plan). WOMMA, Search Engine Strategies and many of their ilk are bustling with bodies…and enough bombast to benefit the bewildered.

It’s impossible to keep tabs on all. Here’s one that’s not especially tech-driven, but whose prospective pundits will certainly give the social media set a run for its money.