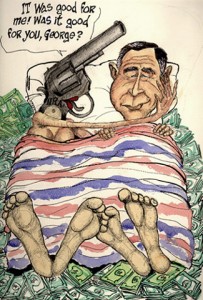 As details continue to unfold from yesterday’s horrific events at Virginia Tech, the gun lobby, as embodied by the National Rifle Association, is no doubt prepping to do battle with emboldened advocates for gun control.

Ironically, one of the NRA’s biggest boosters — our President — heads to the VT campus for his obligatory photo-op. He figures that this is a fairly safe public appearance (detraction) since few will equate his laissez–faire, e.g., pro-NRA, gun control policies with yesterday’s rampage. Or will they?

“I believe this will reignite the dormant effort to pass common-sense gun regulations in this nation,” Sen. Dianne Feinstein said Monday. The California Democrat has led efforts to renew the expired ban on so-called assault weapons (PL 103-322).

On the other hand:

Dana Perino, a White House spokeswoman, deflected questions about gun control Monday by saying the administration is focused on “enforcing all of the gun laws that we have on the books and making sure that they are prosecuted to the fullest extent of the law. “If there are changes to the presidentâ€™s policy, then we will let you know,” Perino said.

Wasn’t it this President who let lapse the law banning assault weapons?

Meanwhile, back at the NRA home page, which, by its look, clearly is not wanting for cash, all words, pictures and video focused on the NRA national convention, held a just a few days ago. “Stand Your Ground” was the assessment of Mother Jones.

Surprisingly, the NRA’s initial response to the mass murder in Virginia was muted , but did hint at things to come.

“Former NRA President Bob Corbin declined to say what the slaying might mean for N-R-A’s public image. The former Arizona attorney general says ‘they ought to look at the person, not the gun.'”

Somehow I don’t believe the NRA will remain low key for very long. It may take a few days for the initial shock to wear off, but soon be on the lookout for the organization’s many messaged surrogates in TV punditry land.