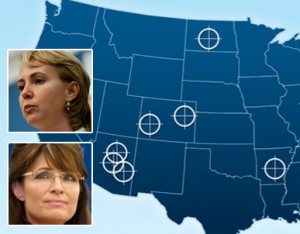 Over the years, this blog has examined how ordinary citizens and eventually bona fide newsmakers — from NGOs to CEOs to politicos — have the capacity to create, manage and syndicate original content, in effect giving them mostly unchecked control over their “media” personas.

The advent of blogs, sponsored Facebook sites, Twitter feeds and YouTube channels has enabled savvy communications counselors to relegate traditional journalists to a co-starring, supportive or even absentee role in the reputation-management equation.

We saw an early glimpse of this several years ago when Mavs owner Mark Cuban took issue with a story that resulted from a New York Times interview he had granted. The audacious Mr. Cuban subsequently took to his blog to reprint the unedited email exchange he had with the reporter, but with his own comments/corrections posted against the sections he felt were inaccurate. That blog post reverberated more loudly than the original Times story.

Some politicians have proclaimed their disgust with the “lamestream” media, turning instead to their own controlled outlets to communicate directly with their constituents. Last week, didn’t incoming Ohio Governor John Kasich ban the media from covering his inauguration? (A public outcry led to a reversal.)

And who among us is not aware of Alaska’s former half-term governor’s declaration to refrain from granting serious news interviews? She now propagates her opinions exclusively on her blog/Facebook page, during her paid gig on Fox News, and in that TLC wilderness show, which the cable network this week (thankfully) chose not to renew for a second season.

This weekend, Ms. Palin suddenly finds herself in the media’s crosshairs stemming from the heinous crime against an Arizona Congresswoman whom she literally targeted during the 2010 mid-term elections. Thus far I haven’t seen her pop up in a mainstream outlet. Rather, her handlers are working overtime to whitewash the steady stream of vitriolic comments on her Facebook site.

One enterprising Brit decided to take a real-time look at the method behind the madness in managing Ms. Palin’s reputation via this, her primary media vehicle. Most of what was quickly expunged was not unexpected:

A negative comment saying, “YOU ARE RESPONSIBLE, YOU EVIL WITCH” – at 17:19PM. 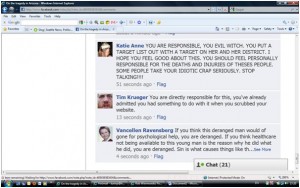 Two negative comments, one suggesting that her publicity team must be working overtime to make her not look guilty and one from a British poster saying “Guns and nutters don’t mix…” 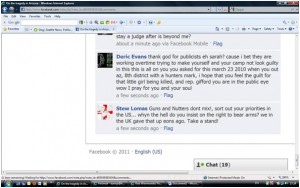 But it wasn’t until this disturbing comment that the inherent dangers of a neutered fourth estate becomes painfully apparent:

A commenter posted the following at 18:12:

“It’s ok. Christina Taylor Green was probably going to end up a left wing bleeding heart liberal anyway. Hey, as ‘they’ say, what would you do if you had the chance to kill Hitler as a kid? Exactly.” 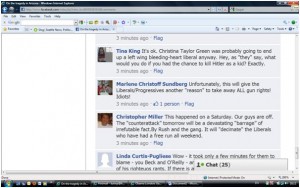 Christina is the nine-year-old girl, born on 9/11, who lost her life in the murderous melee. The British blogger waited for this truly deranged comment to be removed from Ms. Palin’s Facebook page. She waited and waited and waited. The comment remained live on the site. Here’s what the blogger wrote:

“I don’t really know what to make of this. Sarah Palin has the right to edit her Facebook profile – it’s not technically a public platform, it’s a privately owned space. But the fact someone has a right to do something doesn’t mean it is always a good idea, and I think that someone who aspires to public office has an especially strong responsibility to try and engage with the public at large – not just those who agree with them. But still… she’s not currently in any form of elected office and she can do what she likes.

But I find her team’s editorial judgement to say the least… odd.”

After reading this, I can’t bring myself to agreeing with the talking heads who lash out at those for assigning some of the blame for this tragic incident on Ms. Palin. Minimally, as one commenter briefly noted, “guns and nutters don’t mix.” Also, nutters and newsmaker-producers don’t mix.