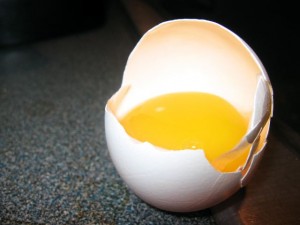 We recently regurgitated news of the first live commercial on the New York (or any?) stage. Unusually, the live ad’s context — not its content — generated a fair share of editorial buzz.

Another posting on this blog looked at the deal a golf ball manufacturer struck with the Russian Space Agency wherein some astronauts would tee-off its product in space. That too generated a good share of media coverage, though the fate of the presumed world’s longest tee shot remained up in the air when we last checked.

This week, we learned of a pair of contextually-driven advertising initiatives, both of which merit inclusion in the “ads that make news” category. The first involves CBS’s publicity ploy to promote its new fall programming on the shells of 35 million eggs. Instead of walking on eggshells, the Tiffany network has chosen to do its talking on eggshells.

The second effort involves US Airways and its announcement offering less-than-squeamish advertisers space on the outside of its barf bags.

“The ads could be for anti-motion sickness medications or other products immediately on the mind of someone who reaches for one of the bags. But Gee said US Airways will look for a wide range of product advertisements to put on its bags.”

Here’s what I recommend to create some real promotional synergy: serve US Airways’ passengers the CBS eggs raw, which will prompt the deployment of the billboarded barf bag. It’s a win-win situation guaranteed to generate gobs of publicity, among other things.