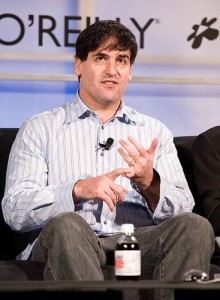 I imagine the folks at YouTube won’t be taking Mark Cuban on their roadshow anytime soon. The brash maverick blogging mogul put a crimp in the #2 video site’s efforts to primp itself for acquisition. In his inimitable fashion, Mr. Cuban let loose at a NYC advertising conference yesterday:

“‘…anyone who buys that (YouTube) is a moron’ because of potential lawsuits from copyright violations.”

“They are just breaking the law. The only reason it hasn’t been sued yet is because there is nobody with big money to sue.”

And let’s not forget about this:

“There is a reason they haven’t yet gone public, they haven’t sold. It’s because they are going to be toasted.”

Other than his usual penchant for making headlines, one might speculate that Mr. Cuban’s motivations for trash talking YouTube has something to do with his own newly launched digital video enterprise — an endeavor that presumably has all the DRM issues satisfactorily covered. The inference, of course, is that Mr. Cuban is playing by the digital rights rules and YouTube is not. Still, it’s ironic that Mr. Cuban’s Broadcast.com (nÃ©e audionet.com) made its name by pirating copyrighted content from radio stations nationwide.

With Mr. Cuban’s remarks getting picked up by the world’s biggest news wholesaler, you can be sure that YouTube’s management, backers and PR team have a bad case of agida today.

But, hey, the caustic writing was on the wall: Mr. Cuban offered this advice to the seller and prospective buyer in a post last week on his blog titled “The Coming Dramatic Decline of Youtube:”

“A word of wisdom to the Youtube folks, sell if you can. A word of wisdom to a potential buyer, the minute the labels see even the hint of deep pockets they are going to come after you for all your worth. It will be a Lawyers Employment Act. Just ask Bertlesman about being the deep pockets behind Napster. Its not different this time.”