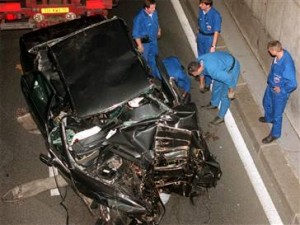 In an age where nothing — I mean nothing – is too tastelessly shocking, an Italian magazine seems to have crossed the line. Chi has published a snapshot of Princess Di as she lay dying in a mangled car wreck.

Some years ago, I worked with the family of Dale Earnhardt to prevent the news media from gaining access to the legendary #3’s autopsy photos. (Earnhardt also was killed in a car wreck — on the last lap of the Daytona 500.)

Initially, it was unclear what these news organizations intended to do with the photos, but ultimately all (except a renegade website owner) said they’d keep the photos private. Even so, in recognition of the world wild web, a law was passed in Florida preventing unfettered access to such graphic and personal images. The law was challenged by First Amendment advocates who took it all the way to the U.S. Supreme Court, which refused to hear the case in effect allowing the Florida law to stand.

Like the Earnhardt case where the media tried to justify its interest in the pics as a means to determine the exact cause of death, “the Milan-based magazine published the snapshot along with excerpts from a new French book that purports to detail a criminal investigation of DianaÃ‚Â’s death.”

In my mind, this is tasteless exploitation designed to sell more magazines on the newsstand. Expect more contrition from Chi’s editor or publisher before too long.