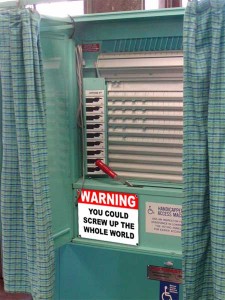 It has become so commonplace nowadays for journalists — mostly of the citizen variety — to “out” PR pros or firms whose story queries are either ill-suited to their tastes or grammatically challenged, or both. If the spammers, I mean senders only took a few moments to check out the space to which their clients aspire, our lot would likely be spared such public abuse.

At Media Bistro’s Media Circus, I had a chance this week to catch a very entertaining Noah Shachtman of Wired’s Danger Room blog. He talked about the early days of blogging, i.e., when “what I had for breakfast” blogs abounded, and shared his humble beginnings churning out content from his basement on a subject near and dear to him: “what’s next in national security.” (He also revealed that he and moderator Manoush Zomorodi fellow speaker BlogHer founder Elisa Camahort are college buddies, though he didn’t recognize her “without the keg over her.”)

In his post this morning, Noah joined the ranks of the many who’ve taken PR types to task for their misguided ways. But these were not any old pitches that found their way onto Noah’s readers’ radar. These happened to originate from a couple of fairly savvy New York-based enterprises that clearly lazed their way into his e-mailbox.

We’ll give the publicist for that New York City nightclub impressario a break. Anyone attempting to exploit Lindsay Lohan’s good name for some cheap publicity can’t be expected to conform to the tenets of modern PR.

But publicists at Howard J. Rubenstein and American Media’s Men’s Fitness magazine should definitely know better. I just can’t see how HJR’s pitch for new voting machines in Florida or the magazine’s “Fittest American” issue qualify for the Danger Room.

But on second thought, tampered-with voting machines did bring us George Bush and with him, severely compromised national security. While America’s fittest Governator has called for closing the border altogether to immigrants, in part to enhance security. With a little creative modification, these pitches could have worked after all.