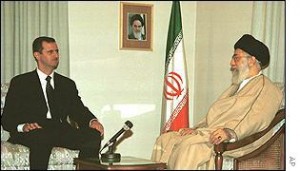 In the previous post, we talked about how the public responds to the work of high-profile actors’ whose off-screen behavior contradicts their on-screen personas.

Lindsay Lohan and Tom Cruise were obvious choices in the Times story that prompted the post, as was Angelina and Brad who’ve given new meaning to the strategy of “doing good and doing well.”

Today I came across a related item that moved via the “fair and balanced” Syrian Arab News Agency (SANA). It carried comments made by Syria’s Minister of Information Dr. Muhsen Bilalnews during a visit to the Syrian Association of Public Relations in Damascus. (Who knew there was one?)

“There is a clear defect in the way through which Syriaâ€™s image is presented to the West, paving the way for distorting campaigns to act freely,” he said.

I suppose if his country wasn’t one of the most destabilizing terrorist-sponsoring, human rights-violating dictatorships in the world, perhaps the West might appreciate its “true image.” Public relations is grounded in facts. Unfortunately, in Syria’s case, the facts speak for themselves.