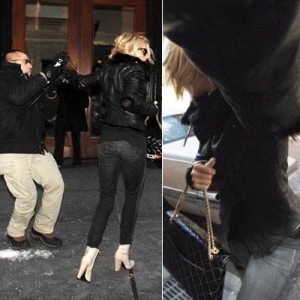 On the third day (today) of the scandal-in-the-making coverage, the Post pops a photo on its front page of the rap/fashion/business impresario with Kim Porter, his long-time girlfriend, coddling their seven-week-old twin girls.

The cover shot was no doubt brokered as an exclusive by People magazine’s PR department to drive single copy sales of the couple’s cuddly spread in the celeb weekly.

Hey, isn’t this the same girlfriend who took Diddy to court to increase child support payments for their shared son? And why, after two days of Diddy-Sienna canoodling coverage, was there no mention of Warhol (celluloid) protege Sienna in the baby cover story? Was that part of the deal? Diddy’s doing?

Apparently, Sienna and Diddy were quite-a-flitty on Saturday night at Crobar (and beyond). “Reps for Miller said, ‘Sienna is only interested in Sean as a friend.’ A rep for Diddy said, ‘They are just friends,'” according to the Post’s venerable Page Six. Even Cindy got into the mix, but to promote Sienna’s new role as Warhol’s muse Edie Sedgewick. Ahhh. There’s the rub.

Sienna’s diva ways (see photo above) surfaced earlier this week when it was reported that her (and Lindsay’s) publicist made some demands of the hoi polloi in advance of Sienna’s arrival to her suite at Sundance.

“Sources said the publicist for her film ‘Interview’ called ahead to the Kara Feinstein Lounge and demanded it be shut 30 minutes early for Miller. Vendors there were also told to ‘minimize the number of employees present and to not harass Sienna.'”

Leslie, I just don’t know how you keep up, and maintain your sanity (not to mention your clients’ repeated 15 minutes of fame).