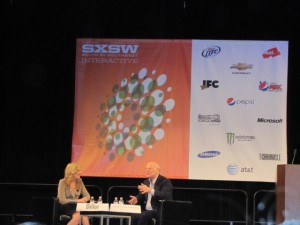 To Poppy’s credit, she managed to cover most of the important topics du jour:

After hearing from a 68-year-old media and Internet mogul, we were treated to the musings of a social media mogul literally half his age when Foursquare founder Dennis Crowley took the ACC stage accompanied by the definitive chronicler of all things social media — Mashable founder/CEO Pete Cashmore. Some of the topics covered:

The capacity crowd especially enjoyed the portion of the interview wherein Cashmore revealed SxSW attendees’ answers (via MOS) to some burning questions about Dennis, e.g., how much is he worth or how old he is. What do you think of first when you hear the name Dennis Crowley? Someone in the audience blurted out “Bieber!”

Another crowd pleaser: the emergence on stage of a Gap print ad featuring Crowley and 4Sq co-founder Naveen Selvadurai striking a pose. Crowley made a point that the hand in question was Naveen’s not his. When Cashmore asked the audience how many want Facebook integration with Foursquare, no hands went up. When he asked how many in the audience use Austin-based Gowalla to check-in, only a dozen of the hundreds went up. (Quite a change from SxSW 2010!)

Another high point was when Mashable’s Stacy Green emerged from backstage to crown Crowley the Mayor of South by Southwest.

As for me, I enjoyed the first question from the audience – a veritable PR coup. This man took the microphone and told rockstars Cashmore & Crowley how a young women in his company simply loves the two of them and could she come on the stage to give them both a hug??? She’s standing right there stage right. Sure enough, they agreed and there she was giving each of them a hug, and her company a plug. “The Today Show” outdoor fans’ signage don’t hold a candle to this hug & plug!

To conclude, Crowley graciously invited the audience to the at the PepsiMAX lot to meet & greet the 40 of his 50 employees who trekked to Austin. A nice New York gesture.