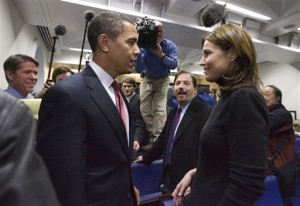 No. I’m not obsessed with President Obama’s fledgling press office or the musings of White House press secretary Robert Gibbs. But maybe I should be.

“Whoâ€™s Undercutting Obama?
For the moment, at least, itâ€™s his press office”

Frankly, the piece is rather shocking given the unabashed adulation garnered by Mr. Obama’s PR handlers during the campaign. Here’s the lead:

“Itâ€™s 3 p.m. and the phone in the White House press secretaryâ€™s office is ringing. It rings and rings and rings. Eventually, a recorded voice asks callers to leave a messageâ€”followed by a second voice saying the voicemail box is full.

After a full week of such calls, a human being answers. But Ben Labolt immediately bristles when asked to spell his name, refuses to give his job title, and says he is going â€œoff the recordâ€ until I stop him to explain that the reporter grants that privilege, not the other way aroundâ€”a basic journalistic standard that Labolt seems unaware of. He soon hangs up without even hearing what I called to ask about.”

No matter what new tools of transparency and direct-to-constituency dialogue this new Administration touts, the PR practice of responding reasonably to a still-breathing and potentially consequential media filter endures today. As Johnston observes:

“Talking to working reporters is not the only way to communicate with the people. The Obama administration seems to be embracing direct delivery of its messages via the whitehouse.gov website and YouTube. They seem to be saying â€œWe donâ€™t need the press to communicate our messages to the people. We can talk to the people ourselves.”

I have a feeling this tension between the new and the old will have legs. Let’s hope the new media idealists don’t burn too many mainstream media bridges in the interim.

A hat tip to Howard Bailen for pointing me to the CJR piece.