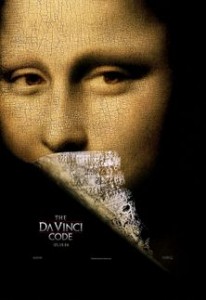 We’re nearly two months out, and the hype, anticipation and controversy (not in that order) surrounding the Ron Howard-directed, Tom Hanks-starring presumed blockbuster film of Dan Brown’s literary work of non-fiction fiction (depending on whom you ask) “The Da Vinci Code” has reached a fevered pitch en route to its opening of the Cannes Film Festival.

Already the naysayers and capitalizers are making headlines. Don’t they know that all this pre-release tumult will actually fuel the box office? Is that what they want?

Or will it? Let’s consider Steven Spielberg’s highly anticipated film “Munich.” I have a sneaking suspicion that that film’s advance controversy actually hurt it at the box office and with the Academy. Don’t you remember: during the early PR/marketing ramp up, some relatively credible people trashed the veracity of the book on which “Munich” was based. Those charges stuck with the film throughout its release campaign.

Last week, The Catholic League ran a prominent ad in The New York Times to pressure Mr. Howard to add a disclaimer to his film that declares the book a work of fiction. And now an advocacy group, DaVinci Outreach and a new (counteractive) film, Jesus Decoded, have jumped into the Frey. Expect others. Add to all of this a plagiarism lawsuit now in the courts.

Messrs. Brown, Howard and, by association, Hanks are in for all kinds of off-message sidebar stories. Will the tainted press help or hinder “The Da Vinci Code” at the box office and in the eyes of critics? Typically I would say that the marketing team should save its money and ride its coattails, but after “Munich” I’m not so sure. At least Mona’s still smiling. (Maybe she’s comforted by the knowledge that 40 million books sold equals boffo box office regardless.)