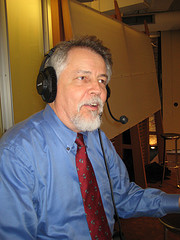 I did get a chance to swing by the SAP offices in the West Village yesterday afternoon to hear from the likes of Cluetrain co-author Doc Searls, former Lego man Jake McKee, Forrester’s Josh Bernoff, and Technorati and Conversation Group’s (the event sponsor) Peter Hirschberg.

Each had his own take on how far we’ve come on the 10th anniversary of the publication of Searls’ seminal book The Cluetrain Manifesto, which Searls says is still ranked around 5000 on Amazon, and sells well in multiple languages around the globe. The Cluetrain name, btw, was conceived “in about 45 seconds,” and the domain, “purchased for about $75.”

Searls, along with one of his three co-authors Dave Weinberger (whom I met about a year ago), is a fellow at Harvard Law School’s Berkman Center for Internet & Society. He gave the audience of roughly 40 wonks and wonk wannabes, (e.g., me), an overview of how his book came to be written including photos of his youthful co-authors, then and (a not-so-youthful) now. He also displayed a sequence of Wired magazine cover stories from around the turn of the millennium. One hailed “Push,” which Searls cited as just another example of a dot-com fallacy.

He took us to his profile page on Facebook, which happened to feature a come-on ad showing a lithesome young “over 30” woman. Searls quipped that he wasn’t sure what “over 30” meant, but sardonically noted that “Facebook is still about selling eyeballs to advertisers…welcome to 1997…it’s still the same crap.”

When asked by Tim O’Reilly, of whom Searls is a big fan, for a book quote on the O’Reilly-coined phrase, Web 2.0, Searls quipped: “It’s what we’ll call the next crash.” (His quote wasn’t selected.) As for Twitter, he said “ twitter is an experiment…not an end state for anything, but a good example of the live web.”

The Facebook dig, of course, reinforced his notion that no matter how far we’ve come, even the most talked about social network remains stuck on capturing as many eyeballs as possible, and the ad revenue associated with it. Haven’t we learned anything?

Searls then shifted to his real passion: the predicted paradigm shift in power from the marketer to the market. He wondered why we are required to sign a 10,000-word small-print legal agreement with Verizon that allows the mobile carrier to cancel our contract on a whim for any reason whatsoever. And why is it necessary to sign a contract to access the free wireless service while we’re holed up for 40 minutes in some airport’s waiting area?

When will we see the day when consumers wrest control from the target marketer? Why should transactions be restricted to “siloed” communities like eBay? What if anyone looking for a four-door mid-sized rental car just put the request out there, and sat back waiting for the “live Web” to surface real-time bids for his or her business? Shouldn’t the consumer always have the upper hand?

Of course, this dolt raised his hand to suggest that the technological divide in this country — between the silicon alleys and valleys and everyone else – would prevent this Utopian vision from becoming a reality. He looked at me, clearly unhappy with my choice of adjectives, and reminded me how many people now belong to Facebook, or how texting and IMs were just dreams a few years ago.

It may take more time, he admitted, but it will happen. You know what? I had to concur.