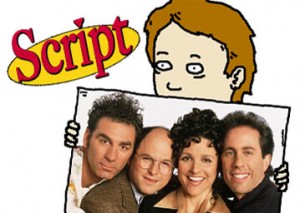 Sauntering past the TV this morning, I caught Harry Smith and the CBS “Early Show” crew conducting an in-studio demo and debate over “double-dipping.”

I knew right away what the term meant (being the true Seinfeld fan that I am). I also recognized the timeliness of the topic with the Super Bowl Game just three days out.

But there was an even greater impetus for this particular segment, one that lends credence to the old PR adage that print begets broadcast and more. Sure enough, today’s New York Times had a piece on a new scientific study that actually set out to assess the health risks of double-dipping:

“The [Clemson University] study, to be published later this year in the Journal of Food Safety, is the only one Iâ€™ve ever seen to proclaim that it was inspired by an episode of ‘Seinfeld.'”

This piece is destined to be among the most e-mailed of the week. I was especially glad to learn of the origins of that famous Seinfeld scene in which George is physically accosted for dipping his chip in the dip, taking a bite, then re-dipping:

“Peter Mehlman, a veteran ‘Seinfeld’ writer, wrote the episode. ‘At the time I was living in Los Angeles, in Venice,’ he told me. ‘There was a party on one of the canals, and apparently someone dipped twice with the same chip. And a woman flipped out. â€˜You just dipped twice! How could you do that? Now all your germs are in there!â€™ I thought, this is just too good not to use on the show.'”

Peter’s an old friend dating back to his days scriptwriting for Howard Cosell. In fact I can personally vouch for his means of acquiring good material.

My wife and I used to live opposite the Manhattan entrance to the 59th Street Bridge. Every year, we’d hold a party to celebrate the NYC Marathon, which unfolded before us through our floor-to-ceiling windows. Peter attended one year, and years later, plucked the experience as a plot line in a Seinfeld episode. While not as famous as the double-dipping scene, we get a kick each time it airs.