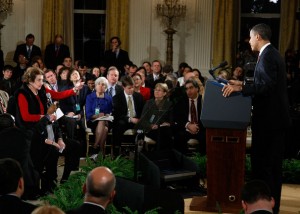 “Every president attempts to circumvent the press corps, viewing it as obsessed with process stories and “gotcha” questions. That’s not exactly fair — they do traffic in substance — but talk shows have provided an easier forum since the days when Bill Clinton first went on Larry King and MTV. Obama, for his part, is the first Internet president, with his radio addresses on YouTube, videos on Whitehouse.gov and official photos on Flickr. There’s a White House blog, and deputy press secretary Bill Burton has been weighing in on Twitter.” 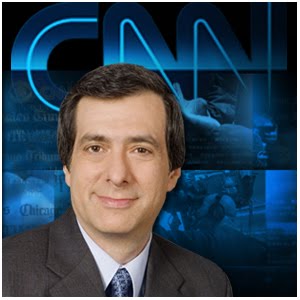 Duh. But I have to agree with Dan Gillmor who questioned in a tweet whether the press corps even has the ability to get at the truth:

The White House press corps naturally is venting over its diminished role, in spite of much wider and qualitative Presidential media coverage than the one or two 20-second sound bites that might survive the standard presser. I mean who can reasonably argue that this President doesn’t do enough jousting with the media, especially when compared to his predecessor?

“It’s a source of great frustration here,” says Chip Reid, CBS’s White House correspondent. “It’s important for us to hold the president’s feet to the fire.”

“NBC White House reporter Chuck Todd calls the situation a “shame,” saying the administration is trying to control the message rather than allowing Obama to be seen “unscripted.”

The Obamaites counter that their boss is among the most transparent that Americans have ever seen. Robert Gibbs, the White House press secretary:

“We have probably done more interviews with more reporters at this point in our presidency than anybody else has. We have hardly been a shrinking violet when it comes to turning on your TV and seeing Barack Obama.”

Communications director Dan Pfeiffer adds that “not doing press conferences is equated with not taking questions, and that’s not true.” While the best way for a president to reach the public in the past was “through the reporters sitting in the first three rows of the White House pressroom. . . . there’s no question that the Huffington Post, Talking Points Memo and their conservative counterparts can drive a story as well as the traditional powers at the New York Times and Washington Post.”

This administration has endured considerable scrutiny of its efforts (or lack thereof) for delivering the digital democracy that served Obama so well on the campaign trail. Yet, even with a paucity of direct-to-constituency communications, one has to admit that the White House’s generous use of new modes of communications, outside the stilted (staged) WH Presser, has offered Americans a wider window into this administration than any in modern history. 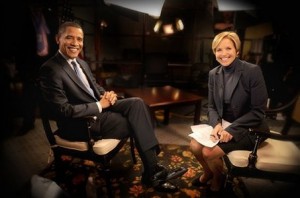 Do these new modes give the President greater control over his message? Well, clearly the creation and posting of original content does, but I’m not convinced that facing a room full of Beltway news correspondents provides a more accurate reflection of Obama’s policies and proclivities than that which might result from a (crowd-sourced) interview with Katie Couric.