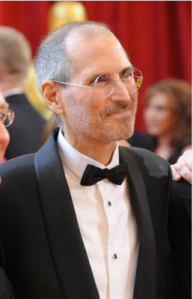 During a recent Publicity Club of New York media panel, I brought up the downside of real-time news, citing Silicon Valley Insider‘s Henry Blodgett’s now-famous faux pas in which he broke the “story” of a supposed Steve Jobs heart attack. The report was wrong…as further evidenced by Mr. Jobs’ star turn in a tux at last night’s Oscar ceremionies —>.

Even so, two of the most influential new-breed journalists today, Gawker’s Nick Denton and TechCrunch’s Michael Arrington, make no bones about their desire to be the first out of the box — even with half-baked muffins. Arrington on Twitter conjecture:

“Sure, lots of Twitter messages are flat out wrong and can spread disinformation. But…other people tend to immediately correct those errors. Bad information is quickly drowned out by good information.”

Speaking for his PCNY co-panelists from the Wall Street Journal and its sibling outlets, All Things D’s Peter Kafka reasserted The Journal‘s commitment to good journalistic practices, and added he’s not averse to incrementally posting pieces of a story as facts become known.

But what happens when a partisan blogger knowingly issues a fabricated, “Drudge-driven” report for unaware citizens to eagerly embrace and email around to their AOL friends? (Email, as opposed to Twitter or SMS, remains the default information-sharing mechanism for much of America.) 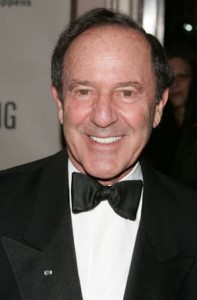 My wife just forwarded me a blatantly anti-Obama piece allegedly penned by my former client Mort Zuckerman. It was sent to her as part of a lengthy email string from the right wingnuts whose naivety in such matters makes the missive’s inaccuracy inconsequential.

In this particular case, a partisan citizen-journalist nut named Paul Hollrah from St. Charles, MO took a recent editorial by Mr. Zuckerman that was critical of Obama, and literally re-wrote it to fuel the keyboards of his disciples.

When my wife showed it to me, I read this paragraph and knew something was rotten:

Seeing his most ambitious initiative, healthcare reform, die in the flames of the Massachusetts Massacre, Obama made a hastily-planned “sortie” to Ohio for yet another Bush-bashing, self-aggrandizing stump speech on job creation. It was vintage Obama… full of left wing hyperbole and planted questions from the Kool- Ade drinkers in the hand-picked audience… but there were just two things wrong with it: 1) Almost everything he said was either wrong or an outright lie, and 2) He is so overexposed that no one in the television audience really wanted to see him.

Could/would Mort have actually written this? I did a quick Google search and came across the truth on the Scopes.com site. The answer is no. Basically, Mr. Hollrah took the opening graph, added his own pointed prose, then set the viral wheels in email motion. Perhaps Mr. Arrington is correct. This disinformation will eventually be drowned out by the truth. But will it?

If you are Mr. Zuckerman’s PR advisor, how would you counsel the esteemed publisher, real estate magnate and potential U.S. Senate candidate to handle? First, I hope his consiglieres have made him aware that these scurrilous words have been attributed to him and they are now rapidly replicating on the Internet.

Second, he should consider the potential political fallout, e.g., Will New York’s Democratic establishment back him without a reaffirmation of his support for President Obama, and maybe even a disavowal of the words Mr. Hollrah put on his lips. Or maybe he should leave well enough alone?