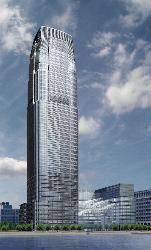 When one thinks of the primary players in the environmental movement, the powers-that-be on Wall Street would not rank high on most people’s lists. That was until the CEO of one of the street’s most venerable firms, Goldman Sachs, revealed plans to inculcate his firm’s 24,000 employees with a sense of environmental stewardship. The story, splashed in today’s New York Times, portrays Goldman CEO Henry Paulson in the adulatory light of someone who puts action behind his words.

It’s reminiscent of BP CEO Sir John Browne’s split with the rest of the oil industry eight years ago on the issue of global warming. His gutsy decision is a case study in how to re-invent a corporate reputation, and thus profit from doing both good and well.

Few knew of Mr. Paulson’s role as chairman of the Board of Governors for the Nature Conservancy or that Goldman’s spectacular new skyscraper in Jersey City was certified through the Leadership in Energy and Environmental Design (LEED) program of the U.S. Green Building Council. Still, with an increasing public concern over the growing fragility of the environment, this is one cause from which Goldman Sachs will derive great institutional benefit. Kudos to Mr. Paulson and team. We await the tangible impact of this bold move.