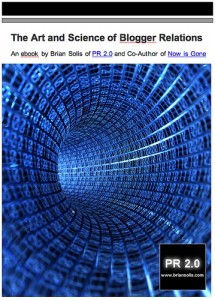 Geesh. Five days away from this blog. That’s the longest absence since first starting to post some two-and-a-half years ago. My truancy, I suppose, is less a function of vacation preoccupation — yes, I did get away with my family to ski for a week — and more tied to my reluctance to become just another cog in the PR blogging echo chamber.

Sure I saw the story and posts about candidate Huckleberry’s handlers’ public (relations) proclamation of their withdrawal of their attack ads, followed hypocritically by a journalist screening of the culprit spot. (Me thinks this regressively dangerous candidate could easily best Bush’s Orwellian approach to communications.)

And then there was Paul Steiger’s must-read front-page first-person farewell to the Wall Street Journal in which the paper’s legendary former managing editor recounted how the newspaper industry has evolved, or devolved as the case may be. One blogger (among many) beat me to the punch by singling out Steiger’s ruminations about a potential strategic alliance between Bloomberg News and The Times. (When I saw it, I wondered whether the recent deal that Times’ sibling The IHT cut with Reuters runs counter to Steiger’s prediction.)

Finally, there was Brian Solis’s e-book on blogger relations. I have no idea how Brian has the time to wax so poetically and voluminously on the issues we all face in our profession. This followed his lengthy pre-New Years post titled “PR Advice for Start-Ups” in which he more or less puts PR in perspective for the many who see our profession as a panacea for what pains purchasers of PR services. (Again, I don’t know how Brian has the time to post so prolifically and still service his clients, but I’m glad he does…and you should be too.)