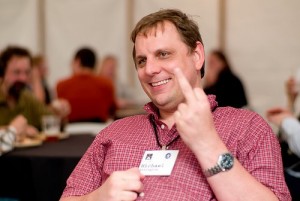 Nowhere is the demand for exclusives stronger than among the handful of media that control the fates of the latest and greatest personal tech products. From Pogue and Mossberg to Gizmodo, CrunchGear, Engadget, Mashable, and of course, the elephant in the early adopter room, TechCrunch.

All invariably ask to be the first to break the new gadget news, but typically the product’s PR team will offer advance test drives to a few with the hope of catalyzing subsequent coverage. The only caveat is that they agree to embargo their reviews until a set date and time.

I therefore found of interest the following tweet posted this evening by Tech Crunch’s Michael Arrington:

We’ve notified a few PR agencies that we won’t work under press embargoes any longer – just the ones that have proven to be unreliable. 8 minutes ago from web

This post has shades of Chris Anderson’s public blackballing of certain PR persons/agencies for their transgressions in dealing with Wired. At least, Mr. Arrington didn’t publicly “out” those who rubbed his site’s news noses the wrong way.

Then again, maybe he should have. What do you think?