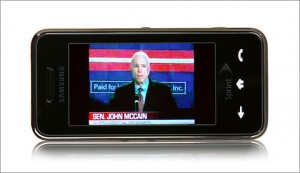 One bought into the pitch. The other didn’t. I’m talking about your two favorite mainstream gadget gurus who today both reviewed Samsung’s iPhone wannabe, the Instinct.

Curious to see both Mossberg and Pogue, let alone The AP, all time their reviews for today when the product doesn’t bow at retail until June 20.

This is three weeks ahead of the debut of Apple’s much-ballyhooed 3G iPhone on whose coattails the folks at Samsung’s agency (Edelman?) seem to have successfully ridden. Good strategy. If you’e going to intro a touch-screen phone, might as well do so to coincide with news from the genre’s undisputed leader.

Today’s dueling reviews also demonstrates that those who’ve proclaimed the days of the PR embargo are dead…are dead wrong. Is it simple coincidence that the prime suspects jumped onto the Instinct media bandwagon on the same day? Here’s a smattering of other coverage:

Notice that both Engadget and Gizmodo reviewed the Instinct June 8. I guess nowadays bloggers get first dibs. As for the others, I wonder if Samsung put a review clamp on the bloggers for June 8 and mainstream June 11? Maybe there is no conspiracy. It just worked out this way. Also, who’s keeping tabs on those that swallowed the story pitch (a better iPhone?) and those who didn’t.