As the Facebook IPO frenzy crescendos, the media pendulum has swung from fawning friendliness to sudden skepticism catalyzed by one giant automaker’s decision to pull its $10 million ad budget from the 900-million+ strong social network.

Interestingly, and mildly reminiscent of its defiant public posture during the government bailouts of its rivals, Ford Motor Company promptly countered by expressing confidence in its own social marketing endeavors on Facebook.

The company’s social media chief Scott Monty, a friend and one of the best in the biz, used his own Twitter pulpit – with its 75k+ followers — to carefully reinforce Ford’s support for Facebook, i.e., he didn’t stray too far from the company’s prepared statement.

“But Scott Monty, social media leader at Ford — which to his credit has more than 1.5 million likes on its main Facebook page to GM’s more than 378,000 — is actively promoting Ford’s commitment to Facebook through his Twitter account (@ScottMonty). He tweeted that Ford believes Facebook ads are effective as part of a general strategy, but not as a “straight media buy.” 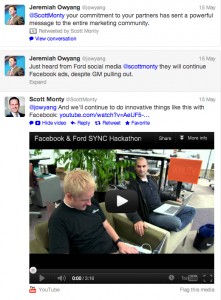 Scott even tweeted a Ford/Facebook-friendly video link  to influential industry analyst Jeremiah Owyang of Altmeter Group (and his 104,000 followers).

Be that as it may, the whole kerfuffle on the eve of Facebook’s initial public stock offering set media tongues-a-waggin’, including this prominent piece in The New York Times Dealbook titled “Ahead of Facebook I.P.O., a Skeptical Madison Ave:”

“Despite the overwhelming level of interest, Facebook is facing fresh concerns over its ability to attract enough advertising revenue to justify that stratospheric valuation.”

Facebook actually has itself to blame for the skepticism in the marketing marketplace. In February, the company’s top executives, minus its famous founder/CEO, travelled to New York for a conference it dubbed fMC. Anybody who was anybody on the creative and buy sides of Madison Avenue attended this live-streamed event wherein Facebook laid out its vision for helping marketers market and in so doing, articulate its “ad”-driven revenue-generating business model. It was summed up by one of the company’s senior marketing executives thusly:

Nearly all who left that conference had drunk the Kool-Aid. Facebook unilaterally declared its intention to dispatch with traditional digital advertising and replace it with “stories” as the primary means for engaging customers. It promised companies that have invested in the construct of elaborate Facebook pages and timelines to amplify the positive fan-generated messages (i.e., stories) to a much wider audience — for an upcharge. The wider the amplification, the greater the fee.

At the time, attendees were so smitten with this vision of consumer-generated stories driving home the marketing message, let alone seeing and hearing from the always inspiring Sheryl Sandberg, they neglected to consider the practical shortcomings.

First, agencies are simply not (yet) organized to capitalize on Facebook’s envisioned paradigm. The creation of original content, e.g., FB pages and timelines, has typically resided in the domain of the PR professional, while ad creative and paid placement, sat squarely in the realm of the ad and media buying agency. While there has been much conjecture about these distinct silos breaking down, for most agencies it simply hasn’t happened yet.

Secondly, and perhaps more importantly, a Facebook ad or story is an entirely different animal than let’s say a Google-delivered search ad that pops based on the recipient’s stated intent. If I’m searching for a digital camera, Google knows and will serve up relevant ads now, or six weeks from now via re-targeting. If I’m a Canon marketing rep, how can I leverage Facebook’s voluminous amount of personal data to pinpoint and engage a pre-qualified buyer? I probably can’t. However, if I’m repping an estrogen-replacement therapy, finding and engaging women over a certain age on Facebook is likely much more do-able.

From The Times piece:

“Itâ€™s one of the most powerful branding mechanisms in the world, but itâ€™s not an advertising mechanism,” said Martin Sorrell, chief executive of WPP, the giant advertising agency.

(Who knew that WPP was an advertising “agency?”)

But Sir Martin, my old boss, is essentially correct. Facebook’s value to marketers lies in its ability to reinforce brands — through fans’ stories or otherwise — and less in its ability to spur (trans)actions from a user who has shared a desire to purchase a specific product or service.

Still, with its 900 million+ users globally, and the data it has collected on each of them, marketers would be remiss in not “liking” what Facebook has to offer. I have one client in the ad tech space who created a birthday greeting ad for his wife and delivered it to her Facebook page, and only her Facebook page, based alone on the targeting data FB made available to him.

“It [the move by GM] will make people rethink how well their investments are working on Facebook but I canâ€™t see a bunch of people following suit,â€ said Peter Kim, chief strategy officer of Dachis Group, a big-data marketing group.” 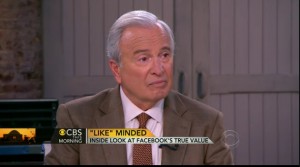