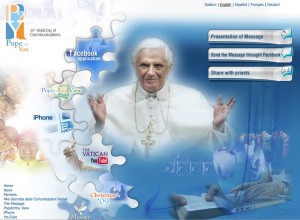 As few as three or four years ago, the tech cognascenti would have led with today’s news that the leader of the Roman Catholic Church is urging priests to blog and embrace digital media. But in today’s Twitter time, that was eons ago. Some social media evangelists may still run with this story, just as the AP has, though most will say it pales in comparison to news of the first real tweet from space (or one from President Obama).

Still, the papal digital edict points to more evidence that engaging constituents can no longer take a top-down, pulpit-driven approach, as Josh Sternberg noted in his HuffPost piece on religions’ (versus religious) use of social media.

In his message delivered to flag the 44th World Communications Day this May (who knew there was one?), Pope Benedict XVI, now with his own social media-enabled site, said:

“The spread of multimedia communications and its rich ‘menu of options’ might make us think it sufficient simply to be present on the Web,” but priests are “challenged to proclaim the Gospel by employing the latest generation of audiovisual resources.”

The Catholic News Service first flagged the Pope’s call to digital arms last September. The Holy See saw (forgive) how other religions, ministries and radicalized religious movements have successfully embraced digital and social communications to re-energize (and re-populate) their respective flocks to evangelize and, for some, terrorize, on their behalf.

“If used wisely, and with the help of experts in technology and communications, the new media can become a valid and effective tool for priests and all pastoral workers for evangelization and communion that are true and full of meaning.”

I wish Pope Benedict well in his mission to join the 21st century. With 1.1 billion Catholics worldwide, and just 23,000 of them registered on the largest “Catholic Church” Facebook page I could find, he and his disciples clearly have their work cut out for them.