So it’s settled (or so I thought). The forward-thinking marketing maven’s media universe was neatly divided into three categories: paid, earned and owned. This was codified in a Forrester post a couple of years back, and updated (by me) to include “shared” media – not as a fourth category, but rather as the desired outcome of an optimized mix of any or all of the previous three.

So this train of thought was cool for a while, until Facebook decided to take a bite of the Big Apple yesterday and in so doing throw a giant monkey wrench into a marketing paradigm that many of us finally thought we had our arms around.

The company gathered its many friends, fans and followers from the tech, media, PR, and advertising spheres for something called fMC where its top execs, and a few clients, unveiled Facebook Premium and a few other newly branded products.

(So much for the SEC’s pre-IPO “quiet period.”)

Here’s the mantra with which every Facebook executive presenting sought to inculcate the live and online audience:

Hold it a sec. No more ads on Facebook? And doesn’t story-telling firmly live in the PR pro’s domain and serve as the primary reason the industry has a leg up on its marketing brethren in the “owned” media category? Is Facebook now insisting that social advertisers get on the story-telling soapbox if they expect to play in the company’s 800+ million-strong walled sandbox? As Clickable writes in a post today:

“Facebook appears bent on shifting the focus to Page stories and is providing Timeline features that draw attention to prime content. These features include the ability to pin a post to the top of Timeline, the ability to highlight posts which will expand to occupy the width of a Page, and highlighted friend activity surfaced on the right side of Timeline. It’s clear that Facebook is using Timeline to help businesses craft a more personal, almost human-like, story, which, in turn, makes direct selling much tougher to accomplish.”

What’s more, once a brand marketer builds its home page and fills it with its own (and its friends’) stories, Facebook Premium will charge a premium (get it?) to evolve that story before the eyeballs of 85% of the brand’s friends (and their friends and their friends). TechCrunch notes that right now:

“Amongst all the business-related news at FMC, Facebook revealed that the average news feed story from a user profile reaches just 16 percent of their friends. Your actively shared links, photos, and status updates probably reach much higher than 16 percent of your friends, while more inane auto-generated posts about new friendships, wall posts, and articles you read may only be seen by your closest buddies.”

So instead of “shared” media as a natural bi-product of a mix of paid, earned and/or owned media, Facebook’s plan will take a quasi-owned/paid “story” and collect a premium from marketers wishing to secure a bigger footprint on the dominant social network. CNET said:

I have only touched upon a small piece of Facebook’s brave new marketing paradigm – and I’m sure I got half of it wrong anyway.

Maybe Facebook knew something we didn’t when it chose to hold its confab at the American Museum of Natural History? After all, history has a way of constantly evolving, i.e., nothing is written in stone.

The company smartly posted info and video about its new approach for social marketers here. Finally, I feel bad for Nick Burcher whose new book “Paid, Owned, Earned: Maximizing Marketing Returns in a Socially Connected World” may soon be in need of a revision. 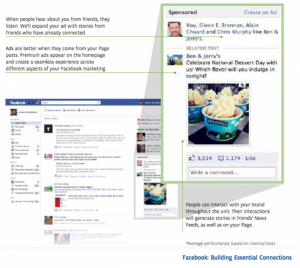