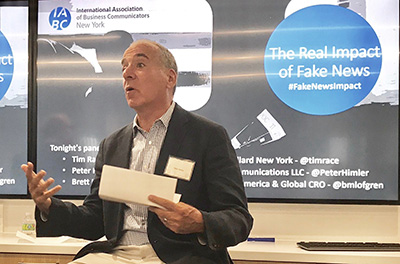 The write-up is posted here.

One point Himler made that wasn’t reflected in the report is that the term “fake news” is not so easily defined. When a company forms an opaque advocacy group or pays a “think tank” to create and disseminate specious content to advance its goals, is that considered “fake news?” (Think ExxonMobil and climate change.)

This has evolved to today when state actors, including sadly, this Administration, actually create and disseminate knowingly false stories to prevail upon the court of public opinion. What’s preventing companies from doing the same thing to stifle a competitor: shareholders, consumers, employees? Maybe. (Consider Uber’s bare-knuckled tactics.)