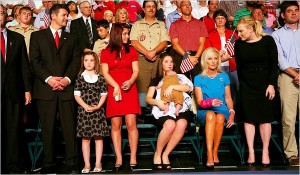 I put myself in the dog house this past weekend — Sunday morning to be exact. It happened when I came across Daily Kos’s well-reasoned assertion that Gov. Palin’s fifth child may actually be her grandson, not her own son as she claims.

In publicly proclaiming over breakfast this joyous Republican revelation, I immediately incurred the wrath of my wife and her family. They questioned the veracity of the source whose musings, they (correctly) noted, were inherently biased. “When it’s in The Times, we’ll believe it.”

I feebly countered that it was the National Enquirer, for goodness sake, that broke the John Edwards fiasco, and that Daily Kos is one of the most highly read and most politically influential blogs being written today. Nonetheless, my own family quickly doused my morning glee with a dose of cold coffee (and shoulder).

The incident got me a thinking. While 68% of Americans read blogs or visit social networks, do any blogs, even the most authoritative, have the capacity to unilaterally create true public discourse? Or do they remain relegated to the role of kindling wood in terms of their influence on the opinions of average Americans?

We already know that media fragmentation, the 24/7 news cycle, and the rise of citizen journalism have combined to accelerate the dilution of many a mainstream news organization’s influence. If the Pentagon Papers revelations broke today, wouldn’t they constitute a one day story?

Still, the revelations over the weekend and the Republicans’ efforts to quash the more damaging story with a less-damaging one, should serve as a worthwhile lesson for digital and traditional PR’ists everywhere. Even as the practice of PR evolves, one core competency holds steady: the ability to understand the dynamics that drive or curtail a story’s potential to catch fire – whether that story is born in a blog or in a mainstream media outlet.

“Some claimed that Ms. Palin had not actually given birth to Trig, but that Bristol had, and that the family had covered it up. Various Web sites posted photographs of Ms. Palin in the months leading up to his birth this year, and debated whether her physique might have been too trim for her stage of pregnancy. The McCain campaign said Ms. Palin announced Bristolâ€™s pregnancy to stop the swirl of rumors.

Ms. Palinâ€™s own pregnancy took Alaska by surprise this year. Even those who worked for her in the governorâ€™s office said they were surprised. Her announcement, in March, was reported in The Anchorage Daily News, which noted at the time that Ms. Palin â€œsimply doesnâ€™t look pregnant.â€

I haven’t shared this with my family, primarily because I’m sure that they, like most of today’s fickle media consumers, have moved on.