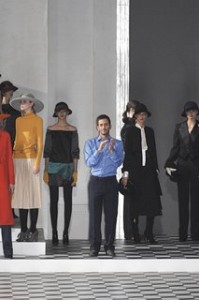 “‘She’s past the point!’ declared Kristian Laliberte, a fashion publicist and self-appointed arbiter of New York socialites, as he finalized the guest list for the show of Yigal Azrou, a designer attempting to woo the socialite in-crowd. ‘She’s becoming Paris Hilton!'”

Anyone strolling by Bryant Park in midtown this week will no doubt glimpse the fabulously fashionable tents that herald the arrival of Fashion Week to our city. In the quote above, The New York Times’s Eric Wilson attempts to wrap his arms around the PR value to designers (and their publicists) of having ever-younger socialites (emphasis on the lite) in the tent to spruce up the shows’ mediability. (Marc Jacobs pictured at left.)

Where have you gone Mrs. Astor? Our nation turns its lonely eyes to you.

In a different, and perhaps more disturbing take on Fashion Week, The Journal’s Vanessa O’Connell reports on all those newly minted fashion bloggers – and their purposely less than objective reporting from the shows. Her piece “The New Fashion Bloggers; Retailers Review Own Wares,” exposes bloggers who are paid by the same retail stores that will eventually profit from the designers’ collections.

“But unlike other media covering the shows, these commentators are in the awkward position of reviewing their own suppliers and their aim is more to boost sales rather than offer impartial critique.”

The advent of citizen “journalists” paid by retailers to cover the collections may be a good idea for the retailer (and the designers who, for obvious reasons, offer coveted show access to the retail bloggers), but what does it portend for the blogger-as-journalist movement (versus blogger-as-marketer)?

“EBay Style Director Constance White, who posted her first fashion-week blog on Friday, acknowledges being ‘pretty gentle because we still do want to have great relationships’ with designers.