Who said mainstream media doesn’t matter? The PR team at Rolling Stone is working overtime to publicize its latest celebrity scribe Michael Hastings, the writer that Gen. McChrystal took along for an ill-advised tour of duty, which may be the last tour for the loose-lipped former Special Ops chief. Even Hastings scratched his head at the naivete of this PR decision:

“It was a sort of natural kind of recklessness that General McChrystal had, which has been with him through his entire career, as I understand it. And inviting me in, was a obviously a risk, as it always is when you invite a journalist in.”

As the story gained online virality, via Politico as a PDF file, we learned that the General had his own PR advisor who cut his teeth at the industry trade publication O’Dwyers. Is this not like having an Ad Age reporter manage your company’s advertising strategy?

Working with journalists is not rocket science. You strive to have your client’s point of view manifest in a story, while helping the journalist obtain what he or she set out to report. It entails a thorough look into a reporter’s body of work and a good understanding of the particular outlet’s editorial DNA.

This vital exercise alone should have given Gen. McChrystal’s PR consigliere pause. It didn’t. Perhaps they had visions of John McCain’s slew of appearances on The Daily Show?

Many publicists, especially those dealing with “celebrities,” proclaim success once the interview logistics are locked in, i.e., the coffee arrived on time. What many fail to realize is that this is the least consequential part of the journalist-PR equation. I mean, how difficult was it to convince Rolling Stone to do this interview, or more likely, to agree to a request by the magazine to profile the man leading the war in Afghanistan?

Once the booking is made, the real work begins. Most media “trainers” focus on preparing the newsmaker with delivery methods and messages. Few have had any contact with the journalist, which often poses a disadvantage. It is the advance work with the reporter that can help ensure a successful engagement.

On the client side, this advance work can help one peg (and prepare for) the reporter’s questions. From the reporter’s perspective, your client can better deliver on your “promise” to the reporter, hopefully resulting in a mutually beneficial editorial conclusion.

If the pre-interview prep — on both sides of the equation — is not adequately or properly handled, the results can be catastrophic. Mediaite’s TV editor Steve Krakauer cleverly listed five “Career-Threatening Profiles Or Interviews â€“ And Their Results:” 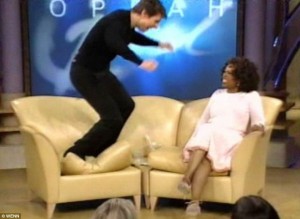 The annals of PR are filled with examples of unprepared or hubristic newsmakers whose careers caved at the hands of an enterprising journalist. But this is America in the 21st digital century, and audiences are fickle and forgetful.

Did Katie break or make Sarah Palin? Did Tom Cruise’s meltdown on Oprah’s couch cause irreparable damage? What about Kate Moss’s mug shot, I mean drug shot on the cover of that British tabloid?