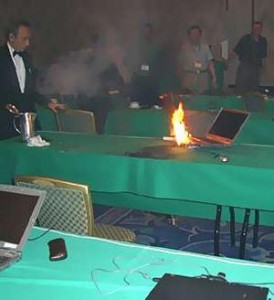 “…should this story also hit the mainstream press, we believe there is headline risk and potentially negative demand ramifications for Dell” was the warning a securities analyst sent to her clients after seeing reports of an exploding Dell laptop computer.

Two weeks ago on a PRSA-sponsored PR blogger panel, I had my head chewed off when I suggested that an issue doesn’t become a crisis until it hits the mainstream media. I was not minimizing the capacity of citizen journalists to signal or fuel awareness of a potential problem, but rather pondering at what point (if at all) should companies take action to set the record straight.

Could AOL and Comcast have prevented the corporate agida sparked by the annoying customer service rep and sleepy technician, respectively, had they taken action when those stories were germinating in the blogosphere? It’s hard to say.

Teresa Valdez Klein, who has commented on Dell’s customer care troubles before on the Blog Business Summit Web site, compared Dell’s public relations problems to those of Britney Spears. “The blogosphere latches onto the story and runs with it, drowning out anything good or redeeming that the company might say,” she wrote.

I just wonder if a hyper-fragmented media, the 24/7 news cycle and an increasingly splintered audience together portend the end of crisis communications as we know it. In other words, can an issue build the necessary “legs” to penetrate a fickle and short-attention-spanned mass audience to do any permanent damage? Does time heal faster than ever? We’re certain to hear more on this.