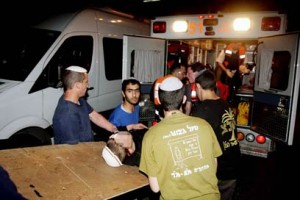 Al Jazeera – Several dead in Jerusalem attack. At least eight people have been killed and 35 more wounded in a shootout at a Jewish school in west Jerusalem. Agencies quoted witnesses as saying that two armed men entered the yeshiva, or religious school, and opened fire on Thursday.

Reuters – At least eight people were killed in gunfire at a Jewish school near Jerusalem on Thursday, the ZAKA emergency service said. Witnesses said two gunmen entered the yeshiva, or religious school, near Jerusalem and opened fire. Ambulance workers said they were treating several people wounded. An Israeli police spokesman said he was checking the report.

BBC – At least eight people have been killed by gunmen who are reported to have infiltrated and attacked a Jewish seminary in West Jerusalem.

The first writes of a breaking news story often sets the tone for subsequent news coverage. As I write this first write of today’s blog post, we learn that two armed Palestinian terrorists, one wearing an explosive belt, sneaked into a school in Jerusalem and opened fire on eight students.

Yet, in three early reports on this unfolding tragedy — from Al Jazeera (pan-Arab), BBC and Reuters – you will notice the absence of any mention of “children” or “students” being slaughtered and whether the gunmen are indeed Palestinian terrorists.

Perhaps Israel’s communications folks should take a page from the Clinton for President playbook to decry media bias?

Here’s how it really unfolded (taken from the lead in Ynetnews.com):

It’s no wonder PR is always top of mind in the State of Israel. It’s a constant uphill battle. Perhaps Israel should send a TV crew into the West Bank to capture and disseminate the Palestinians celebrating the murder of innocent civilians?