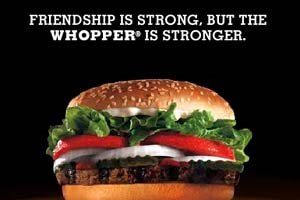 I am one who subscribes to Mike Moran’s sage advice to “Do It Wrong Quickly” in which the best-selling author, distinguished engineer, and digital marketing strategist encourages web marketers to experiment until they get it right.

After all, the cost to re-jigger an ineffective web or social media campaign is minuscule compared to re-imagining, re-shooting and re-purchasing a broadcast TV or print spot.

Who among us doesn’t admire those companies that break new ground for engaging audiences on Facebook, YouTube, Twitter, or even Second Life — even if the magic potion separating the successful from the myriad failed social media programs remains elusive. They should just keep trying and measuring outcomes.

What hasn’t changed, at least as I see it, is how much the so-called success of a social media campaign is measured by its ability to generate buzz in the edit-sphere. In fact, media buzz frequently is the sole determinant of ROI.

Burger King’s recent Facebook flamed friend fiasco was a total home run on several fronts. You didn’t hear about it? Well, it went like this: some ad/PR creative types thought it would be fun to offer up a Whopper in exchange for Facebookers dropping ten of their friends. What’s more, those “friends” that were swapped out for a piece of meat on a bun were informed of the ignominious trade.

Maybe I’m old fashioned. I’m bummed when I lose a single Twitter follower. Who knows how those dropped friends reacted, but BK didn’t seem to care. It created buzz (and biz) and those were the goals. Right? Facebook, to its credit, asked BK to modify the application since its policy smartly prohibits alerting friends when they’ve been dumped.

BK balked and pulled the whole shebang…but not until 200,000+ FB’ers each shed ten friends, flaming up a double cheeseburger’s worth of press and restaurant visits. Most marketing pundits (i.e., the ones wearing burger-scented cologne) proclaimed the promotion “brilliant.” I admit that this was clever and even successful, albeit in a squirrelly kind of way.

Or perhaps nastiness is the recipe for buzz generation?