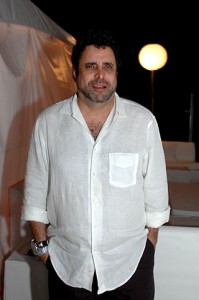 March comes in like a lion and goes out like a lamb. On this first day of the month that ushers in spring, we’re seeing some lion-like behavior aimed at two vital critics at arguably the most influential newspaper in the nation.

The first incident involved the braggadocio restaurateur whose too-real reality show didn’t help in the reputation or reservation department. I’m talking, of course, about Jeffrey Chodorow (pictured) and his ill-fated adventure with chef/restaurant namesake Rocco Dispirito. Lawsuits and a failed NYC eatery served as the project’s just desserts.

The latest kerfuffle involves Mr. Chodorow’s reaction to Times food critic Frank Bruni’s annointment of zero stars to Chodorow’s new Kobe beef steak house. The gruff, flamboyant and rich restaurateur reached into one of his deep-pockets to come up with a reported $40,000 for a full-page ad and Grade A prime placement opposite Mr. Bruni’s Wednesday restaurant review. (Bruni did reply, btw.)

“Mr. Bruni comes to us from Rome where he was not the local expert on Italian cuisine….In fact, there hasn’t been a real food critic with food background…at The Times…since Ruth Reichl…”

Chodorow then extended his new restaurant’s fresh notoriety by publicly offering any of his employees an all-expense paid trip for two to the Caribbean if they recognize Mr. Bruni at any of his 20+ eating establishments.

“In the piece, Konheim said Horyn ‘has a lack of real education in the fashion business â€” she doesn’t even know how to pronounce Lanvin.’

The WWD item was pegged to rumors that Vera Wang, also the subject of a some misgivings from from Horyn’s keyboard, was considering blackballing the critic from her shows. Konheim recounted the conversation:

“Vera called and said, ‘Aren’t you afraid?,’ he told WWD. I said, ‘Afraid of what?â€¦That she’s going to get a front-page story in The New York Times saying Bud Konheim’s an a–hole?'” Though that response may seem harsh, Konheim said that result could be the ‘best publicity’ he could get.”

“The best publicity?” I suppose…if you think that Paris Hilton facing jail time for driving with a suspended license while on probation is a good thing.

The bigger question for our brethren in the biz: does a public calling-out of an influential fashion, book, film or food critic — from The Times or elsewhere — serve as a business catalyst or the kiss of death? Aren’t Jeffrey, Bud and Norman, for that matter, flaming the fans who might otherwise have missed these one-time only reviews? Food for thought.

Perhaps the afflicted should consider the aplomb of Broadway impresario David Merrick who solved his critic problem by eliciting glowing quotes from seven people with the same names as the day’s popular theatre critics. Their words and names appeared in ads promoting Merrick’s latest production. Now that’s “the best publicity.”