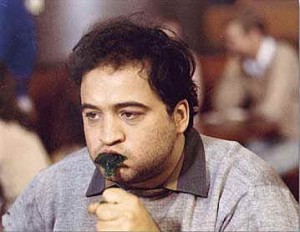 It was that Belushi-inspired gorge-fest in Brooklyn that usurped all other newsmaking wannabes on the 4th of July.

Everywhere we turned, the mellifluous-sounding names of Joey Chestnut and Kobayashi succeeded in capturing the collective consciousness — not only here, but abroad as well.

And why not? It had all the ingredients (and few fillers). Even Consumer Reports agreed by recently naming the Nathan’s hot dog as the second best in America (behind Hebrew National).

ESPN aired the hot dog eating contest live, and thousands of other media outlets weighed in with reports of a lock-jawed Kobayashi losing his crown (and his cookies) before a cheering crowd.

It’s unclear whether this annual ritual translates into incremental hot dog sales for Nathans (or ketchup sales for Heinz), but it certainly can’t hurt. One glutinous winner: the sport of Major League Eating . The AP reports:

“Chestnut said he probably won’t eat a regular meal until tonight. But normalcy will be short-lived. Next week, he’s heading back to New York, where Pizza Hut is hosting an eating competition. Chestnut plans to be there.”

Good for Pizza Hut! It’s like getting Tiger Woods to commit to playing in one’s golf tournament. Well, maybe not.