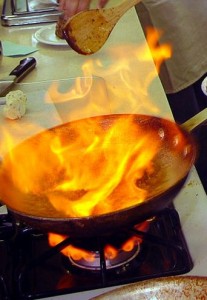 Must be nostalgia week. Back in the day when 9/11 was just another day, the Bush in the White House wasn’t evil and stupid, and Soho was what Tribeca was and Nolita is, I handled PR chores for an exceedingly popular restaurant/art gallery called Central Falls on West Broadway at Houston Street, the gateway to Soho.

After the rent skyrocketed, owner Bruce Goldstein decided to relocate the restaurant to Seventh Avenue South with a new name, The Falls, and new backers, actor Matt Dillon among them. (If you don’t know Matt Dillon, he’s Kevin Dillon’s older brother.)

As plans took shape, Bruce was approached by a New York magazine writer named David (“Brat Pack”) Blum who had a contract to write a book on the subject of…the opening of a new restaurant. He was granted carte blanche to the hiring, menu development, design and PR meetings, not to mention an open tab and entry to special events.

The restaurant opened with great fanfare (if that’s what you call being embraced by the Conde Nast crowd). For my part, I had tried valiantly to secure a review from New York Times restaurant critic Bryan Miller, but he blew me off repeatedly. In hindsight, this was probably a good thing since the eatery’s food, unlike its style-hungry clientele, was menza menza [sic?].

Yesterday, in a comment on this blog, Becky drew my attention to a worthwhile blog post by current Times restaurant critic Frank Bruni in which Mr. Bruni dissects a PR pitch for a food trend story.

“For readers unaccustomed to the way publicists work, they (wisely) mull whether their client restaurants belong to or reflect any trends, then (aggressively) alert reporters to that trend, in hopes that an article about it will include the client restaurants…Sometimes, like right now and right here, the publicists are rewarded.”

As for my pitch to critic Miller, it wound up being included in Blum’s book using Miller’s own less-than-flattering words. The book, which was published after the restaurant shuttered ts doors, was titled: Flash in The Pan.

I suppose if I took all the years of press rejection to heart, I’d be in Bellevue today. Becky, a hat tip to you for the lead.