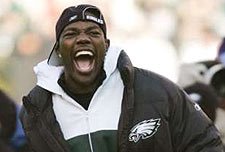 What’s with T.O.? It seems that every time the Philadelphia Eagles’ star wide receiver opens his mouth, someone gets offended. Who can forget Owens’ diss of his teammate, QB Donovan McNabb, following last year’s Super Bowl? I think he said: “I wasn’t the guy who got tired in the Super Bowl,”

Now he’s been quoted in the media vetting his anger at the Eagles franchise for not recognizing his milestone 100th reception. It was sufficiently offensive that it required a very public apology. With his apology barely making it through one news cycle, T.O. again opened his mouth to insert his big foot . McNabb was again the object of his disaffection. (Don’t these two have to see one another in the huddle?)

I’ve talked in the past about how common the practice of media training is for sports pros, but in Terrell’s case, he should be trained to avoid being interviewed.